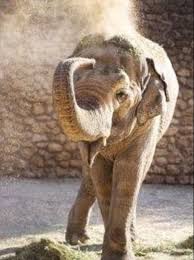 Separated from her family and held in solitary confinement for 43 years.

Flavia’s life of misery is only one example of why ElephantRescue.Net stands against the $16 billion dollar zoo industry.

The Sun reports that “The female Asian elephant arrived at the zoo in the city of Cordoba in southern Spain when she was three years old, in 1976.

“She was euthanised on March 1 after suffering deteriorating health over the past few years. And reports said the elephant was also suffering from deep depression.

“The Local ES said Flavia was known as the “saddest elephant in the world” as she was separated from her herd when young.

“She was at the heart of numerous campaigns to stop elephants being kept in captivity. Amparo Pernichi, environmental spokeswoman for Corboba, said it was “sad news” for the zoo – particularly those who cared for her. She added: “In the last six months, the physical state of Flavia got worst, but especially in the last two weeks.” Pernichi said when the elephant was struggling to stand up, she was initially given a sedative.

“Once Flavia had fallen asleep, she was given another injection to euthanise her, to end her suffering.

“Animalist Party Against Mistreatment of Animals (PACMA) said they had been working to save Flavia from captivity until her very last moments. Experts from Belgium and France, who saw Flavia in January, said she had lived all of her life in confinement and solitude and was a symbol of the sad life of animals in zoos.”