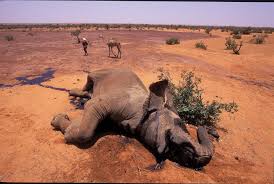 According to South Africa’s news24, “Botswana launched a review on Wednesday of a 2014 hunting ban imposed to reverse a decline in elephants and other wildlife.

“The prohibition on big game sports hunting was the work of ex-president Ian Khama, a keen conservationist, to shield species decimated by hunting and habitat loss.

“But lawmakers from the ruling Botswana Democratic party have been lobbying to overturn the ban, especially on elephant hunting, saying populations have become unmanageably large in parts – placing the animals on a collision course with humans.

“Khama’s successor, President Mokgweetsi Masisi, launched a month of nationwide consultations on Wednesday that could ring in the end of the ban.

“‘President Masisi is scheduled to meet researchers. Tomorrow he will address a kgotla (traditional gathering).’

“The review comes five months after Khama relinquished power to Masisi, and just days after a wildlife charity said about 90 elephants were slaughtered for their tusks in Botswana in recent months.

“With its unfenced parks and wide open spaces, landlocked Botswana has the largest elephant population in Africa, at over 135 000.”